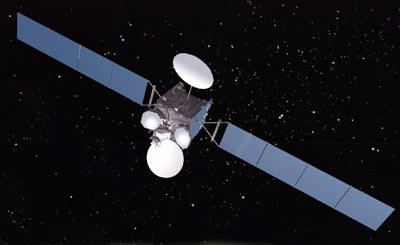 Galaxy 8-i is one of the most powerful satellites to join PanAmSat Corporation's fleet of spacecraft, with nearly 10 kilowatts of power at beginning of life. It is a Hughes HS-601HP body-stabilized model built by Hughes Space and Communications Company in El Segundo, Calif.

The entire 32-transponder payload of Galaxy VIII-i operates in Ku-band, and is dedicated to Galaxy Latin America, which provides DIRECTV service to Mexico, Central and South America and the Caribbean. Through the use of digital compression, the service will include more than 300 channels, split between Spanish and Portuguese language programming. Launched 8 December 1997, Galaxy VIII-i is the dedicated DTH platform for Galaxy Latin America.

On 15 November 2002, PanAmSat terminated its contract with Boeing Satellite Systems for the almost-completed Galaxy-8iR satellite, claiming that Boeing had defaulted on the terms of the contract, and requested $72 million from Boeing to refund prior advance payments and other costs. The satellite was later converted into the ProtoStar 2 satellite, which was launched in 2009.

Galaxy VIII-i lost its Xenon Ion Propulsion Systems (XIPS) probably because of build-up of residues on the thrusters' grids, which significantly shortened the satellite's projected operational life, originally expected to last until 2012. It was put in graveyard orbit in February 2004.