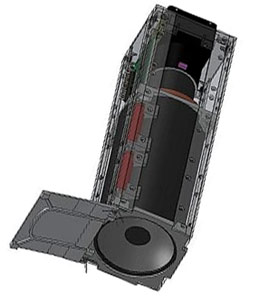 The Dove-1 mission is a technology demonstration nanosatellite for Cosmogia Inc., later renamed Planet Labs, for remote sensing purposes based on the triple CubeSat form factor.

The goal of the mission is:

Dove-1 did this by transmitting health and image data to the ground.

Dove-1 is based on the 3U cubesat form factor. The design mass is 5.8 kg. Basic physical dimensions are 100 mm × 100 mm × 340 mm, with four 100 mm × 300 mm deployable solar arrays. The Dove-2 superstructure is custom built by the Cosmogia team. The load bearing structure is basically comprised of three 100 mm × 100 mm skeleton plates, with L rails along each 300 mm corner edge. Four 100 mm × 300 mm solar arrays are spring-loaded to deploy from camera end of the satellite, in a "dart" configuration. Power storage is provided by Lithium-Ion cells. The batteries were recharged by solar cells mounted on the body of the satellite and on the four deployable solar panels. Dove-1 attitude is approximately determined using the magnetic field vector from the onboard magnetometers. Dove-1s attitude will be controlled by a B-dot controller, comprised of 3 aircore coil magnetorquers, and reaction wheels. The communication subsystem consists of a S-band radio for two-way communication, an X-band radio for downlink, and an Iridium modem for telemetry and commanding. The telescope has a 90 mm aperture and a high-resolution camera.

Dove 1 is licensed to collect images of the Earth and will undertake a short-duration experimental mission in a circular, low-Earth orbit (approximately 250 km) at an inclination of 51.6°. The satellite was launched as a secondary payload on the maiden flight of the Antares-110 launch vehicle on 21. April 2013. Dove-1 provided earth imagery of a resolution to discern individual trees. It reentered after 6 days on 27. April 2013.