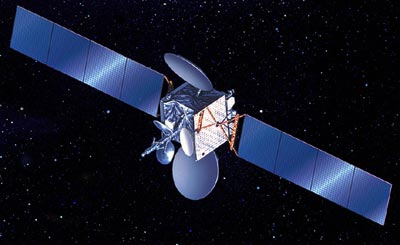 To expand channel capacity and strengthen in-orbit redundancy, DirecTV, Inc., ordered a new satellite from Hughes Space and Communications Company (HSC) in 1998. The new spacecraft, called DirecTV 1-R, is a Hughes HS-601HP model satellite scheduled that was launched in October 1999 under a delivery-in-orbit contract.

It is positioned at 101 degrees West longitude among DirecTV's three existing spacecraft, which are "classic" Hughes HS-601 models built by HSC. Collectively those three satellites have the capacity to deliver more than 200 channels of entertainment programming to subscribers that are equipped with DSS™ digital home receiving units, which feature an 18-inch dish.

The new satellite replaces DirecTV-1, which will remain available as in-orbit backup. DirecTV 1-R carries 16 Ku-band transponders, for additional Ku-band capacity that will be used to deliver new programming services. With 7.7 kilowatts, DirecTV 1-R will deliver nearly 30 percent more power than its predecessor.

DirecTV's satellites operate in the BSS portion of the Ku-band spectrum (12.2-12.7 GHz) and employ circular polarization. Depending on configuration of the transponders, they can deliver 50 to 55 dBW radiated power over the contiguous United States, Alaska and Hawaii.

All Hughes HS-601HP spacecraft use the same basic bus design, allowing the company to realize efficiencies gained by production volume, tooling investments and quantity buys. The Hughes 601 was introduced in 1987, and it has become the world's best-selling large satellite model, with more than 81 ordered. The "classic" Hughes 601 model, with silicon solar panels, provides up to 4-5 kilowatts total spacecraft power. The Hughes 601HP version uses gallium arsenide solar panels and other technological advances to provide as much as 10 kilowatts.

The HS-601HP body is composed of two modules. The first contains the primary bus structure that carries all launch vehicle loads and contains the propulsion subsystem, bus electronics and battery packs. The second payload module is a structure of honeycomb shelves that hold the communications equipment, electronics and isothermal heat pipes. Reflectors, antenna feeds and solar arrays mount directly to the payload module, and antenna configurations can be placed on three faces of the bus. This modular approach allows work to proceed in parallel, thereby shortening the manufacturing schedule and test time.

Beginning January 2013, the satellite will be operated for RSCC from an inclined orbit at 56° East as a back-up to Bonum 1 for about one year, before it will be retired.