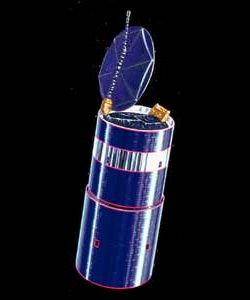 In October 1997, Hughes Space and Communications International Inc. was awarded a contract for its first commercial satellite for Russia. The contract was awarded by BONUM-1, a subsidiary of Media Most, a Moscow-based private Russian media group that develops satellite television broadcasting services for Russia.

BONUM-1 was the 53rd HS-376 to be ordered. It contains eight active Ku-band transponders, which, as a result of digital compression technology, provides up to 50 channels using 80 watt traveling-wave tube amplifiers. BONUM-1 serves European or West-Siberian parts of Russia, selectable on-orbit by ground command.

The HS-376HP spin-stabilized spacecraft consists of two main sections. One is the spinning section, which contains the apogee kick motor, power system, secondary propulsion, and most of the attitude control and the command and telemetry subsystem elements. The fully redundant subsystem controls and monitors the spacecraft through all mission phases. The secondary propulsion subsystem controls spacecraft orbital velocity, inclination, attitude, and spin speed. The other main section of the spacecraft is the despun portion, which houses the customized communications payload, including the transmitters, receivers and antennas.

All HS-376HP models have two telescoping cylindrical solar panels. These panels and the deployable antennas are stowed for compactness during launch. The highly reliable design makes full use of a nickel-hydrogen battery to maintain uninterrupted broadcasting during eclipses. The BONUM solar panels use gallium arsenide solar cells similar to those proven on previous HS-376HP spacecraft. The HS-376 design minimizes the number of required mechanisms and has never had a deployment failure.

Bonum-1 provided active services until 2010. Finally im December 2014, it was sent to a graveyard orbit.