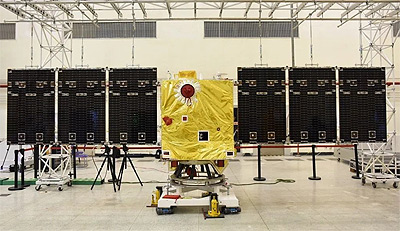 CHASE (Chinese Hα Solar Explorer), nicknamed Xihe, is designed to test a newly developed satellite platform and conduct solar observations. The scientific payload of the satellite is an Hα imaging spectrograph (HIS), which can, for the first time, acquire full-disk spectroscopic solar observations in the Hα waveband.

The Hα Imaging Spectrograph (HIS) is the scientific payload of the CHASE satellite. It consists of two observational modes: raster scanning mode and continuum imaging mode. The raster scanning mode obtains full-Sun or region-of-interest spectral images from 6559.7 to 6565.9 Å; and from 6567.8 to 6570.6 Å with 0.024 Å pixel spectral resolution and 1 min temporal resolution. The continuum imaging mode obtains photospheric images in continuum around 6689 Å with the full width at half maximum of 13.4 Å. The CHASE mission will advance our understanding of the dynamics of solar activity in the photosphere and chromosphere.

It will complement the observations by on-orbit solar spacecraft (such as SDO, IRIS, STEREO, PSP and Solar Orbiter), as well as future solar missions of the Advanced Space-based Solar Observatory (ASO-S).