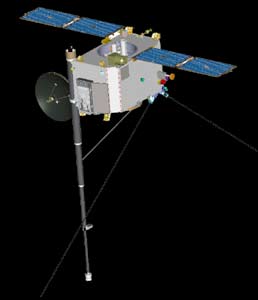 The STEREO mission will provide a totally new perspective on solar eruptions by imaging CMEs and background events from two observatories simultaneously. To obtain unique views of the sun, the twin observatories must be placed into a rather challenging orbit where they will be offset from one another. One observatory will be placed “ahead” of the Earth in its orbit and the other, “behind” using a series of lunar swingbys. Just as the slight offset between your eyes provides you with depth perception, this placement will allow the STEREO observatories to obtain 3-D images of the sun.

APL mission designers determined that the most efficient and cost-effective method to place the twin observatories, launched aboard a single rocket, into their respective orbits is to use lunar swingbys. This is the first time this technique has been used to manipulate orbits of more than one spacecraft. Mission designers will use the moon's gravity to redirect the observatories to their appropriate orbits – something the launch vehicle alone can't do.

For the first three months after launch, the observatories will fly in an orbit from a point close to Earth to one that extends just beyond the moon. STEREO Mission Operations personnel at The Johns Hopkins University Applied Physics Laboratory, in Laurel, Md., will synchronize spacecraft orbits so that about two months after launch they encounter the moon, at which time one of them is close enough to use the moon's gravity to redirect it to a position “behind” the Earth. Approximately one month later, the second observatory will encounter the moon again and be redirected to its orbit “ahead” of Earth. When combined with data from observatories on the ground or in low-Earth orbit, STEREO's data will allow scientists to track the buildup and lift-off of magnetic energy from the sun and the trajectory of Earth-bound CMEs in 3-D.

The two STEREO observatories will be nearly identical with selective redundancy. The spacecraft bus will be built by The Johns Hopkins University Applied Physics Laboratory (APL), in Laurel, Md., with NASA Goddard Space Flight Center procuring the instruments. Each observatory and its instruments will be integrated at APL.

The STEREO mission consists of two solar-powered, 3-axis-stabilized spacecraft, each with a launch mass – including propellant – of approximately 620 kg. The spacecraft will communicate with the APL-based Mission Operations Center via NASA's Deep Space Network.

The significant challenge in spacecraft design is the large number and extent of the instrument fields-of-view, coupled with the various instruments' competing design requirements to ensure successful science observations.

The major design drivers to support the science instrument performance are a conductive outer surface for the energetic particle experiments, stringent electromagnetic compatibility and interference requirements for the radio burst tracker, and contamination control of both volatiles and particulates for the imager experiment.

Following Instruments are on board of each of the two probes:

The STEREO probes were launched 26 October 2006. Observation began in early 2007. On 6 February 2011, the two spacecraft were exactly 180° apart from each other, allowing a view of the entire Sun for the first time.

Contact with STEREO B was interrupted on 1 October 2014, immediately after a planned reset of the spacecraft. In August 2016 signals of STEREO B were received again.