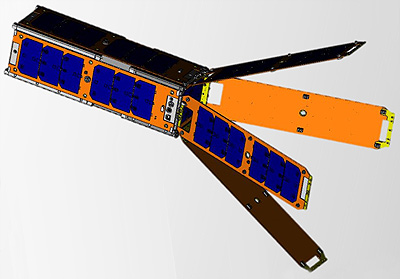 USS Langley is a proof-of-concept mission for providing global internet access via a nanosatellite constellation. The Unix Space Server (USS Langley) is a small satellite under development by a team of Midshipmen at the US Naval Academy in Annapolis, Maryland. USS is a low cost, commercial off-the-shelf (COTS), open source satellite that will act as a webserver and router in space using Internet Protocol (IP) and Linux (the open source Unix operating system). The idea of utilizing IP in space was originally developed at NASA; however, the project was cut in favor of custom protocols still used today since IP is impractical past LEO. Linux based computers have also been used in satellites before, but never as servers. USS will provide webserver access to a ground station in Annapolis and other ground stations with a three meter dish and an S-band transceiver. The webserver will be accessible to users who are connected to the internet when the satellite is in range of a ground station.

A secondary planned mission to continue the PSK-31 multi-user transponder experiments attempted on the previous PCSAT2 (2006) payload on the ISS and the RAFT (2007) satellite was not implemented.

USS Langley is built on a satellit bus provided via NRO's Colony-1 program. NRO purchased 12 3-unit CubeSat busses with deployable solar panels and three-axis control from Pumpkin Inc. The NRO distributed the structures to other Defense Department or federal agency partners and universities to develop and integrate a variety of payloads.

Spacecraft attitude is controlled by, and operates in, a "Space Dart" mode. Due to the low orbit (300 km) atmospheric drag provides a stabilization torque.