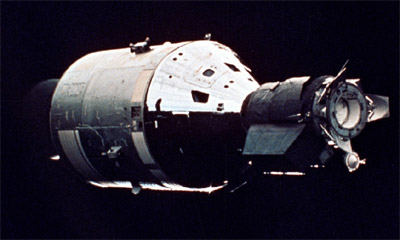 For the Apollo-Soyuz Test Project (ASTP), the United States used an Apollo Command and Service Module (CSM) modified to provide for experiments to be conducted during the mission, extra propellant tanks and the addition of controls and equipment related to the Docking Module. Launch was accomplished with a Saturn-1B.

The Docking Module was designed jointly by the United States and Soviet Union, and built in the United States. Its purpose was to enable a docking between the dissimilar Soyuz spacecraft and the U.S. Apollo. It was a three meter long cylinder 1.5 meters in diameter, and in addition to serving as a docking device, also served as an airlock module between the different atmospheres of the two ships (the U.S. ship with 100% oxygen at 260 millimeters of mercury; the Soyuz with a mixed oxygen-nitrogen atmosphere at 520 mm Hg – lowered from its usual 760 mm Hg for this mission).

At 3:50 pm EDT July 15, 1975, 7 hr, 30 min, after the Soyuz launch-a Saturn-1B flawlessly lifted the Apollo spacecraft from Kennedy Space Center's launch complex 39B. The spacecraft entered orbit with a 173.3 km apogee, 154.7 km perigee, 87.6 min period, and 51.8° inclination. The spacecraft's launch-vehicle adapter was jettisoned at 9 hr 4 min ground elapsed time and the crew maneuvered the Apollo 180° to dock with the adapter and extract the docking module. These events were videotaped and transmitted to earth later via ATS 6 (NASA's Applications Technology Satellite launched 30 May 1974). A maneuver 2 hr later at 7:35 pm circularized the orbit at 172 km. The Saturn S-IVB stage was deorbited into the Pacific Ocean 1 hr 30 min later. Contact of the two spacecraft, 51 hr, 49 min, into the mission.

On 23 July the command-module tunnel was vented and the crew put on spacesuits to jettison the docking module. The command and service module unlocked from the DM at 3:43 pm EDT, and a 1 sec engine firing put the CSM into a higher orbit (232.2 km apogee, 219.0 km perigee) so that the DM could move ahead. A second maneuver put the CSM in a 223.2 km by 219.0 km orbit. Deorbit began at 4:38 p.m. The command module and service module separated, the drogue and main parachutes deployed normally, and the Apollo splashed down at 224:58 GET (5:18 p.m. EDT July 24) in the Pacific Ocean 163W and 22N, 500 km west of Hawaii.