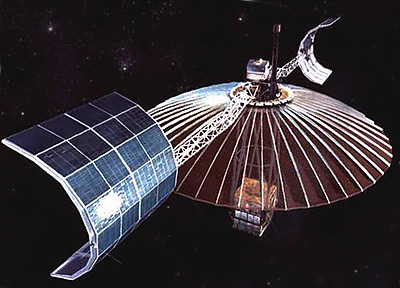 The ATS-6 (Applications Technology Satellite) spacecraft was designed to accomplish a wide spectrum of experiments dealing with communications, technology, meteorology, and science using a three-axes stabilized platform in geostationary orbit. It was launched on a Titan-3(23)C from Cape Canaveral on 30 May 1974 directly into geostationary orbit, and the science experiments were activated by June 15. Before launch it was known as ATS-F.

The mission was divided into three major phases:

An end-of-mission activity occurred at the end of July, 1979 in which the satellite was moved 450 km out of the geostationary orbit and began an eastward drift of ~6.l per day. At the same time the satellite was spun-up around one of its equatorial-plane axes and scientifically entered a fourth phase.

The objectives of the scientific experiments on ATS-6 were to study and to gain a better understanding of the environment in space at the synchronous altitude. This has been accomplished by monitoring the spatial and temporal variations of the various plasma regimes, the geomagnetic field, and energetic particles present in the vicinity of the spacecraft and the interactions of each of these components.

In addition to its technology experiments, ATS-6 became the world's first educational satellite. During its 5 year life, ATS-6 transmitted educational programming to India, the US and other countries. The vehicle also conducted air traffic control tests, was used to practice satellite-assisted search and rescue techniques, carried an experimental radiometer subsequently carried as a standard instrument aboard weather satellites, and pioneered direct broadcast TV. The satellite also played a major role in the Apollo/Soyuz docking in 1975 when it relayed signals to the Houston Control centre. It was boosted above GEO when thruster failures threatened to prevent further control of the spacecraft.

ATS-6 was also to demonstrate NSSK of a geosynchronous satellite using two electron bombardment ion engine systems with cesium propellant. Thruster development tests included a lifetest of 2614 hours and 471 cycles. Thruster input power was 0.15 kW which resulted in a thrust of 4.5 mN at a specific impulse of 2500 s. The ATS-6 was launched on May 30, 1974. One of the ion engines operated for about one hour and the other for 92 hours. Both of the engines failed to provide thrust on the restarts due to discharge- chamber cesium flooding. The feed system flooding problem caused overloading of the discharge and high- voltage power supplies. This failure mechanism was verified through a series of ground tests.

The IPS operation demonstrated an absence of EMI related to spacecraft systems, verified predictions of spacecraft potential with engines operating, and demonstrated compatibility with the S/C star tracker. It was found that the ion engines or just the neutralizer could discharge large negative spacecraft potentials at all times. Further, tests indicated that differential charging was reduced by the neutralizer when operated in spot mode and eliminated by operation of the ion engine.

Plans to launch the duplicate ATS G were shelved, when the ATS-6 mission proved to be successful.