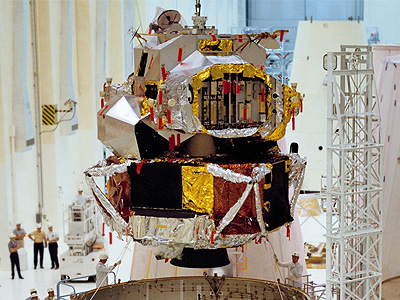 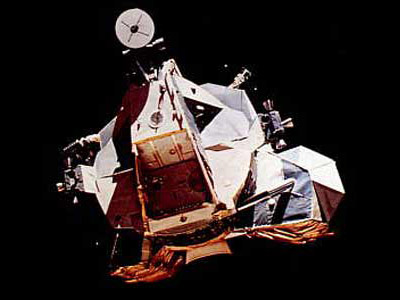 The Apollo 5 or LM 1 mission was a test flight of the Apollo lunar module in low earth orbit. Due to weight constraints, this first module was flown with reduced equipment and was lacking landing legs.

The LM consists of an ascent stage and a descent stage. Both stages function as a single unit during separation from the CM, lunar descent, and lunar stay. The descent stage serves as a launching platform from which the ascent stage lifts off from the lunar surface. The ascent stage operates independently during the lunar ascent, rendezvous, and docking phase of the Apollo mission.

The ascent stage, control center of the LM, is comprised of three main areas: crew compartment, midsection, and equipment bay. The crew compartment and midsection make up the cabin, which has an overall volume of 6.7 m3. The basic structure is primarily aluminum alloy; titanium is used for fittings and fasteners. Aircraft-type construction methods are used. Skin and web panels are chemically milled to reduce weight. Mechanical fasteners join the major structural assemblies with epoxy as a sealant. Structural members are fusion welded wherever possible, to minimize cabin air pressurization leaks. The basic structure includes supports for throst control engine clusters and various antennas. The entire basic structure is enveloped by thermal insulation and a micrometeoroid shield.

The Ascent Stage contained the Aerozine 50 fuel / nitrogen tetroxide oxidizer fueled pressure-fed Ascent Propulsion System (APS) engine and two hypergolic propellant tanks for return to lunar orbit and rendezvous with the Apollo Command/Service Module. It also contained a Reaction Control System (RCS) for attitude and translation control, which consisted of sixteen hypergolic R4D thrusters similar to those used on the Service Module, mounted in four quads, with their own propellant supply. A forward EVA hatch provided access to and from the lunar surface, while an overhead hatch and docking port provided access to and from the Command Module.

Internal equipment included a life support system; a VHF communications system with two antennas for communication with the Command Module; a unified S-band system and steerable parabolic dish antenna for communication with Earth; an EVA antenna which relayed communications from antennas on the astronauts' Portable Life Support Systems through the LM; primary (PGNCS) and backup (AGS) guidance and navigation systems; an Alignment Optical Telescope for visually determining the spacecraft orientation; rendezvous radar with its own steerable dish antenna; and an ice sublimation system for active thermal control. Electrical storage batteries, cooling water, and breathing oxygen were stored in amounts sufficient for a lunar surface stay of 48 hours initially, extended to 75 hours for the later missions.

The descent stage is the uncrewed portion of the LM; it represents approximately two-thirds of the weight of the LM at the earth-launch phase. The main structure of the descent stage consists of two pairs of parallel beams arranged in a cruciform, with a deck on the upper and lower surfaces, approximately 65 inches apart. The ends of the beams, approximately 81 inches from the center, are closed off by aluminum beams to provide five equally sized compartments: a center compartment, one forward and one aft of the center compartment, and one right and one left of the center compartment. A four-legged truss (outrigger) at the end of each pair of beams serves as a support for the LM in the SLA and as the attachment point for the upper end of the landing gear primary strut. Two of the four interstage fittings for attachment of the ascent stage are mounted on the forward compartment beams. The other two fittings are on the aft beam of the side compartments. The five compartments formed by the main beams house Main Propulsion Subsystem components. The center compartment houses the descent engine, which is supported by truss members and an engine gimbal ring. Descent engine fuel and oxidizer tanks are in the remaining compartments.

The Descent stage's primary job was to support a powered landing and surface extravehicular activity. When the excursion was over, it served as the launch pad for the ascent stage. Octagon-shaped, it was supported by four folding landing gear legs, and contained a throttleable Descent Propulsion System (DPS) engine with four hypergolic propellant tanks containing Aerozine 50 fuel and nitrogen tetroxide oxidizer. A continuous-wave Doppler radar antenna was mounted by the engine heat shield on the bottom surface, to send altitude and rate of descent data to the guidance system and pilot display during the landing. Almost all external surfaces, except for the top, platform, ladder, descent engine and heat shield, were covered in amber, dark amber, black, silver, and yellow aluminized Kapton foil blankets for thermal insulation.