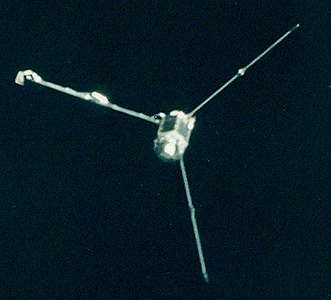 PFS (Particles & Fields Subsatellite) 1 and 2 were deployed from the Apollo 15 and 16 service modules in lunar orbit to study the plasma, particle, and magnetic field environment of the Moon and map the lunar gravity field. Specifically it measured plasma and energetic particle intensities and vector magnetic fields, and facilitated tracking of the satellite velocity to high precision. A basic requirement was that the satellite acquire fields and particle data everywhere on the orbit around the Moon.

The Apollo subsatellite was a hexagonal cylinder 78 cm in length and approximately 36 cm across opposite corners of the hexagon with a mass of 36.3 kg. Three equally-spaced 1.5-meter-long deployable booms were hinged to one of the end platforms. A fluxgate magnetometer was on the end of one boom and the other two carried tip masses to provide balance. A short cylinder was attached to the end platform opposite the booms and was used for the initial deployment and spin-up of the satellite, which was achieved using a spring loaded mechanism in the SM bay. A wobble damper inside the satellite removed precessional and nutational motions. An S-band antenna protruded from the panel opposite the booms. Solar panels covering the six sides provided about 24 W of energy in sunlight and an average power of 14 W over one orbit of the Moon. The power subsystem also included a battery pack of 11 silver cadmium cells. An S-band transmitter was capable of sending 128 bits/s to the Earth. A magnetic core memory unit provided a storage capacity of 49,152 bits when the spacecraft could not transmit directly. Two solid state particle telescopes were mounted on an end panel of the spacecraft and four particle analyzer devices were attached to the sides. The subsatellite spin axis was approximately perpendicular to the ecliptic plane. Its spin rate stabilized at about 12 rpm after boom deployment.

PFS 1 was deployed on 4 August 1971 at 21:00:31 UT by launching it from the scientific instrument module of the Service Module at a relative velocity of approximately 1.2 m/s using a spring loaded device which also imparted a spin of 140 rpm to the satellite. After release, the booms were deployed, lowering the spin rate to 12 rpm. The spin axis was normal to the ecliptic plane within 1 degree. The orbital period was approximately 120 minutes, clockwise as viewed from the north. The perilune of the first orbit was 102 km, the apolune 139 km, and the inclination 28.5 degrees with respect to the Moon's equator, but the orbit was rapidly altered by gravitational perturbations. The geocentric ecliptic longitude of the Moon at the time of launch was 155 degrees. The subsatellite provided about 6 months of data coverage before two successive electronic failures in February 1972 caused the loss of most of the data channels. The surviving data channels were monitored intermittently until June 1972 and then more or less continuously until late January 1973, when ground support was terminated. It is assumed the subsatellite orbit decayed and it impacted the Moon sometime after this, the impact site is unknown.

PFS 2 was deployed on 24 April at 21:56:09 UT by launching it from the Service Module at a relative velocity of approximately 1.2 m/s using a spring loaded device which also imparted a spin of 140 rpm to the satellite. After release, the booms were deployed, lowering the spin rate to 12 rpm. The spin axis was about 5.5 degrees from normal to the ecliptic plane. A planned CSM orbit shaping maneuver was not performed prior to deployment to avoid firing the CSM main engine due to degraded backup thrust vector control, so the satellite was not released into a nominal orbit. The initial periselene was 90 km, initial aposelene was 130 km, and initial orbital inclination was 10 degrees with respect to the Moon's equator, but the orbit was rapidly altered by gravitational perturbations. The orbital period was approximately 120 minutes, clockwise as viewed from north. The geocentric ecliptic longitude of the Moon at the time of launch was 138 degrees. Because the initial orbit was not optimal, it decayed rapidly and the subsatellite prematurely impacted the Moon on 29 May 1972, after 34 days (425 revolutions) in orbit. The final telemetry was received at 20:31 UT just before lunar impact.