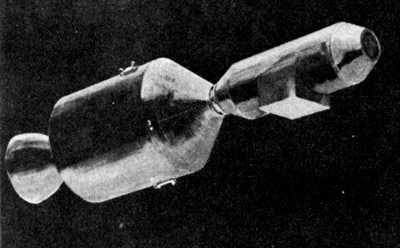 LM&SS (Lunar Mapping and Survey System) was a lunar mapping module, which NASA developed in cooperation with NRO as a back up, in case Lunar Orbiter would not be able to deliver useful imagery of the lunar surface. LM&SS had the classified cover name Upward (initial code name Elba). It would have been launched with a crewed Apollo capsule.

LM&SS was based on the camera system of the military KH-7 Gambit-1 reconnaissance satellite, mounted inside the shell of the KH-8 Gambit-3 reconnaissance satellite. The reentry vehicle was replaced by a docking adaptor to dock with the Apollo capsule and the Satellite Control System was omitted. LM&SS was to be carried in place of the Lunar Module. At the end of the mission, the film was to be retrieved by an astronaut through the docking adaptor.

In June 1965 Lockheed was selected to modify the KH-7 systems for use as the LM&SS. The first test flight in earth orbit was planned for December 1967 on a Saturn-1B rocket. The lunar flights would have been launched on Saturn-5 rockets. When Lunar Orbiter was proved to be successful, the program was cancelled in the summer of 1967. Four LM&SS modules were in various stages of production at this time and were put into storage.

Later it was planned to make use of these systems in flying them in low earth orbit under the Apollo Applications Program, but this was cancelled after intervention of the NRO.