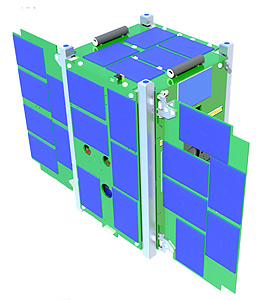 Yarilo 1 and 2 are two 1.5U CubeSats developed by the Bauman Moscow State Technical University (BMSTU) for research of the Sun and solar-earth coupling.

The payload onboard Yarilo 1 is the X-ray photometer for registration of emission of the whole Sun in the range 0.5-15 keV developed in P.N. Lebedev Physical Institute of Russian Academy of Science (LPI RAS). This highly sensitive instrument allows the observation of solar activity associated with the processes of flaring energy release, which has a significant impact on an interplanetary environment and space weather.

The payload onboard Yarilo 2 is gamma-radiation and charged particle detector (DeCoR) developed by Skobeltsyn Institute of Nuclear Physics, Lomonosov Moscow State University. The device objectives are to study fast variations of electron flows in the gaps between radiation belts, as well as to study the particle flows and gamma radiation dynamics in low orbits depending on geomagnetic conditions in the range of 0.3-3 MeV.

As a part of the mission, it is plan to create a formation flight using two-bladed rotary solar sail technology and work out the algorithm for maintaining the constellation. After the end of the lifetime, both CubeSats will passively deorbit into the lower layers of the atmosphere using the solar sail.