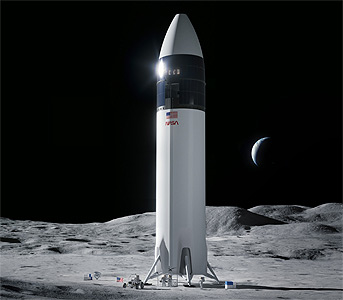 Starship-HLS (Sharship Human Landing Systen) is the planned lander for the first crewed Artemis mission to land on the moon.

In April 2021 the Starship-HLS was selected under a sole-source contract for NASA's Human Landing System (HLS). The firm-fixed price, milestone-based contract total award value is $2.89 billion.

NASA's SLS rocket will launch four astronauts aboard the Orion spacecraft for their multi-day journey to lunar orbit. There, two crew members will transfer to the SpaceX human landing system (HLS) for the final leg of their journey to the surface of the Moon. After approximately a week exploring the surface, they will board the lander for their short trip back to orbit where they will return to Orion and their colleagues before heading back to Earth.

Starship-HLS is derived from SpaceX's Starship, but is modified for operation as a lunar lander. This includes a set of landing engines, modified landing legs and the omission of equipment for atmospheric flight. It is not designed to return to earth. The HLS variant will use high-thrust methox RCS thrusters located mid-body on Starship HLS during the terminal lunar descent and landing, and will also include a smaller crew area and a much larger cargo bay, be powered by a solar array located on its nose below the docking port. It uses the same high-thrust RCS thrusters for liftoff from the lunar surface.