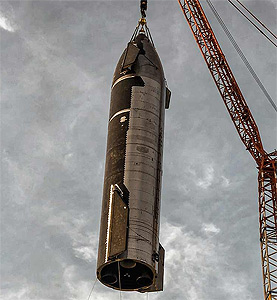 For the maiden orbital flight, Starship-S20 is fitted with the propulsion, attitude control systems and themal protection systems. The Starship Orbital test flight will originate from Starbase, TX. The Booster stage will separate approximately 170 seconds into flight. The Booster will then perform a partial return and land in the Gulf of Mexico approximately 32 km from the shore. The Orbital Starship will continue on flying between the Florida Straits. It will achieve orbit until performing a powered, targeted landing approximately 100 km off the northwest coast of Kauai in a soft ocean landing. Recovery of both stages is not planned.

SpaceX intends to collect as much data as possible during flight to quantify entry dynamics and better understand what the vehicle experiences in a flight regime that is extremely difficult to accurately predict or replicate computationally. This data will anchor any changes in vehicle design or CONOPs after the first flight and build better models to use in internal simulations.