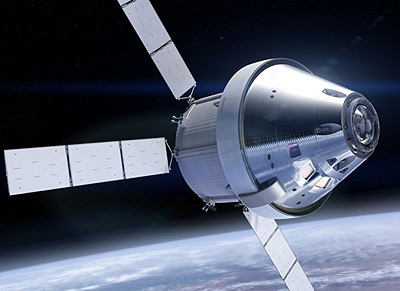 Orion MPCV (Multi-Purpose Crew Vehicle) is planned crewed spacecraft for missions to the moon, asteroids and eventually to Mars.

MPCV ia a capsule design, which inherits its shape from the Apollo capsule, but is otherwise a completly new construction. It was to launched on a Ares-1 launcher derived from Space Shuttle technology. In contrast to Apollo, landing will be on land, assisted by air-bags or retro-rockets.

After the Constellation was cancelled, the Orion CEV capsule was renamed Orion Multi-Purpose Crew Vehicle (MPCV). It will serve as a vehicle for lunar and interplanetary missions. The LEO missions to ISS will instead be flown on commercial vehicles.

An unmanned testflight of a Orion capsule without service module called Orion-EFT 1 launched by a Delta-4H rocket was launched in December 2014.

In late 2012 ESA joined the project and will provide a service module for Orion based on the ATV service module. The OME main engine for the first three missions are Aerojet AJ10-190 (OMS) engines left over from the Shuttle. Later missions will feature a different engine, possibly with green propellants.

The first Orion MPCV capsule, the uncrewed EM-1 mission, will be launched in 2020 on a SLS (Block 1) rocket. In March 2019 NASA announced, that they are considering launching the EM-1 missions on two commercial launch vehicles (Falcon-Heavy (Block 5)) instead, with one launcher orbiting the Orion capsule and the other the transfer stage.

The second will follow in 2022 on a SLS (Block 1) iCPS rocket on a mission to lunar orbit, carrying four astronauts.

In September 2019, NASA commited in ordering 6 Orion capsules at minimum with an option of six more. The first three were oredered directly, three more will be ordered in 2022.