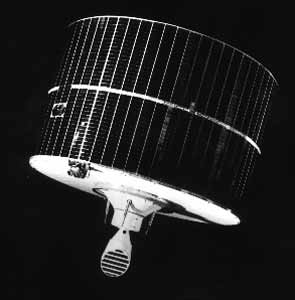 Skynet 1A and 1B were the first generation communication satellites to provide communications links for the UK's armed forces.

Both the UK's Skynet-1 and the NATO's NATO-2 satellite programs resulted from the US invitation to join the IDCSP communicaten satellites system. The satellites were to be interoperable with the IDCSP svstern. and the program was initially called IDCSP/A (for augmentation).

The satellites were develloped by Philco Ford Space & Reentry Systems Division. The satellite technology was based on the IDCSP near synchronous satellites, with several improvements implemented. They featured a mechanically despun antenna, that provided increased gain relative to IDCSP and both 2 and 20 MHz channels. The only difference between the Skynet and NATO satellites was the antenna pattern which in case of Skynet provided a uniform global pattern and in case of NATO was shaped to cover only the NATO nations, from the eastern coast of North America to Turkey. The Skynet and NATO satellites were placed into a svnchronous orbit and had a stationkeeping capability. The satellites featured a solid rocket motor for apogee maneuver and hydrazine propulsion for on-orbit use.

The satellites were all launched on Delta-M rockets from Cape Canaveral.

Skynet 1B was launched on 19 August 1970, but an apogee motor failure left the satellite in an highly elliptical transfer orbit.