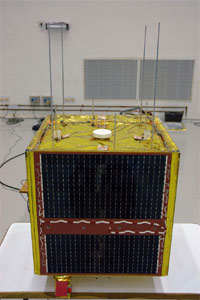 ANUSAT (Anna University Microsatellite) is a 50 kg micro satellite being designed and fabricated at Anna University, Chennai. The aim is to bring university based academicians and research and development experts of ISRO together to implement a project in university environment. ANUSAT carries a digital store and forward payload for amateur communication. In addition, a number of technological payloads like digital receiver and turbo coder and MEMS based gyro and magnetic field sensor are planned to be in this micro satellite. During the year, the configuration of this satellite has been finalised and breadboard/design verification models of the core electronic systems completed.

The Indian Space Research Organisation (ISRO), sponsor of the project, would decide the launch of the micro-satellite. This collaboration is the first of its kind in India.

After aboaut 3 years in orbit, the ANUSat mission came to an end in April 2012.