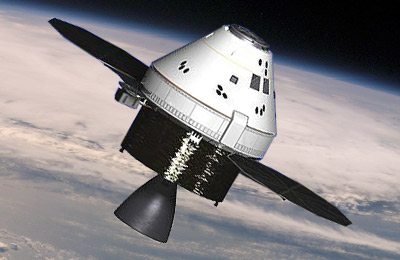 Project Constellation's Orion (formely CEV - Crewed Exploration Vehicle) was to be a crewed spacecraft for low earth orbit missions to ISS, missions to the moon and eventually to Mars.

CEV was be a capsule design, which inherited its shape from the Apollo capsule, but will otherwise a completly new construction. It was to launched on a Ares-1 launcher derived from Space Shuttle technology. In contrast to Apollo, landing was to be on land, assisted by air-bags or retro-rockets.

After the Constellation was cancelled, the Orion capsule was renamed Orion Multi-Purpose Crew Vehicle (MPCV). It will serve as a vehicle for lunar and interplanetary missions. The LEO missions to ISS will instead be flown on commercial vehicles.

An uncrewed testflight of a Orion capsule called Orion-EFT 1 was launched by a Delta-4H rocket in late 2014.

In late 2012 a cooperation with ESA was initiated. Under this project a new Orion-MPCV with European service module will be developed.