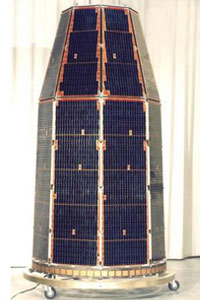 Ofeq 1, originally named Oz 1, was the first Israeli satellite. It was built by IAI (Israel Aircraft Industries) and MBT for the Israel Space Agency (ISA). With its successful launch, Israel became the eighth nation to launch an indigenous satellite.

The spin stabilzed satellite was built on a irregular octagonal prism structure of conventional aluminum, 2.3 m high, 1.2 m base diameter, 0.7 m top face. Power was provided by body mounted solar cells. It carried a technology payload, but the full payload was not disclosed but included magnetometers and house-keeping monitoring.

On 19. September 1988 Ofeq 1 was launched on an indigenous launch vehicle, the Shavit, form Palmachim Air Force Base. Due to geographical restraints, it was put into a retrograde orbit. It tested solar power generation, transmission and reception and verified the system's ability to withstand vacuum and weightless conditions. It also performed data collection on space environment conditions and Earth's magnetic field. Expected life was a few weeks but did not reenter until January 14 1989 because of higher than expected orbit.

The similar Ofeq 2 was launched on 3. April 1990. After reaching orbit, it conducted some communications experiments. It fell into the atmosphere and burned up on 9 July 1990.