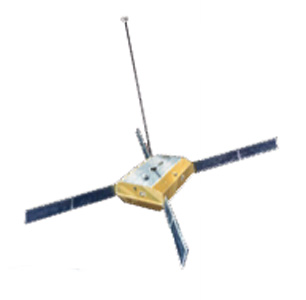 NOSS (Naval Ocean Surveillance Satellites), which were also referred by the code names White Cloud and Parcae, are constellations of passive ELINT satellite, which pinpoint the location of ships by triangulation of their Radar emissions.

These satellites were developed by the Naval Research Laboratory (NRL) based on the experience on the Grab and Poppy ELINT satellites. Each launch on top of an modified Atlas-E/F or an Atlas-H rocket consisted of the MSD (Multiple Satellite Dispenser) mother satellite, which also acted as an upper stage for the stack. In orbit, three NOSS satellites were separated and flew together in a triangle formation. They had gravity gradient orientation booms 10-15 meters long. These ensured that the side of the satellite body where the signal antennas were mounted was constantly oriented toward the Earth. The satellites maintained an assigned position in a group at distances of 30 to 240 km one from the other by using on-board low-thrust engines. This satellite array determined the location of radio and radars transmitters, using triangulation, and the identity of naval units, by analysis of the operating frequencies and transmission patterns. As a result of ground processing of direction-finding data on the signals from target emitters provided by a group of satellites, and also sequentially by several groups of satellites, the coordinates, direction and speed of travel were obtained.