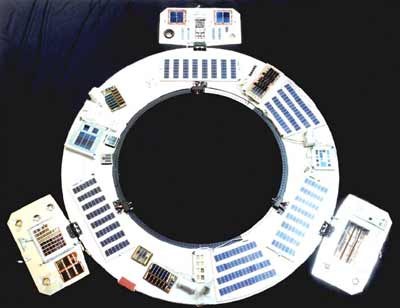 The three LIPS (Living Plume Shield) satellites were jettisonable plume shields used on MSD dispensers on NOSS missions to protect the Parcae (NOSS) space craft from the exhaust of the solid fuel motor. They were built by the Naval Research Laboratory (NRL).

On three missions, experiments were mounted on the anterior surfaces of the annular plume shields, which are unaffected by the plume, creating useful low-cost satellites on the base of a part, which would be otherwise only space debris.

LIPS 1 was lost with Parcae 4 in a launch failure.

LIPS 2 was launched with Parcae 5 and successfully attained orbit. It had a mission to demonstrate direct downlink of tactical data from a low Earth orbiting spacecraft and carried an UHF single-channel transponder. Additionally three double sided solar panels providing electrical power. One side of one panel contained 300 specimens of 2 cm × 2 cm gallium arsenide (GaAs) solar cells while each of the other five sides contained 104 specimens of 2.1 cm × 6.2 cm silicon (Si) solar cells. The U.S. Air Force developed GaAs cells were provided to the Navy in a cooperative program to build, test, qualify and fly a GaAs solar panel.

LIPS 3 launched with Parcae 9. It was a test bed for new solar cell technologies, among them NASA-LeRC's indium phosphide homojunction solar cell module.