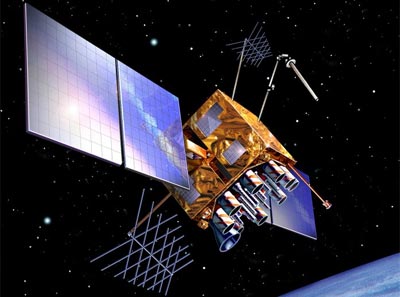 GPS-2R (Global Positioning System) or Navstar-2RM (Navigation System using Timing And Ranging) are the third evolution stage of the second generation of the GPS satellites.

The GPS-IIR replenishment satellites are produced by General Electric Astrospace (later Martin Marietta and Lockheed Missiles & Space) under a contract issued in 1989, which included 21 satellites based on the commercial AS-4000 bus. These provided improved navigation accuracy and longer autonomous satellite operation than earlier model GPS satellites. The satellites were three-axis stabilized and operated at downlink frequencies of 1572.42 MHz and 1227.6 MHz (L-Band) and 2227.5 MHz (S-Band). Lockheed was responsible for launch and flight operations support of the GPS-IIR through 2006.

Block IIR satellites provided dramatic improvements over previous blocks. They could determine their own position by performing inter-satellite ranging with other IIR vehicles. They also had reprogramable satellite processors enabling problem fixes and upgrades in flight, increased satellite autonomy, and radiation hardness.

Additionally, the Block IIR could be launched into any of the required GPS orbits at any time, assuming a 60-day advanced notice, and required many fewer ground contacts to maintain the constellation. All of these improvements result in increased accuracy for GPS users and a cost 33 percent less per satellite than the previous generation of Block IIA satellites. Up to 12 Block IIR satellites were to be modified to use the new military M-code on both the L1 and L2 channel as well as the more robust civil signal L2C on the L2 channel. The M-code signal was to enable GPS operations in a higher jamming environment and reduce vulnerability of military GPS-based systems. The first modified Block IIR (or IIRM) was launched in 2005.

The second last satellite, GPS-2RM 7, includes a demonstration payload that will transmit a new third civil signal, known as L5. The L5 demonstration payload will comply with international radio frequency spectrum requirements and pave the way for future generations of GPS spacecraft that will include an operational third civil signal to improve the accuracy and performance capabilities of the system.