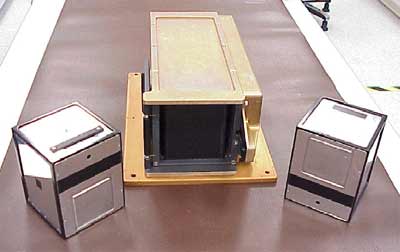 The MEPSI series (Micro Electro-Mechanical Systems-based PicoSat Inspector) consts of pairs of tethered picosatellites, similar to the CubeSat design, to develop and demonstrate the capability of deploying an onboard miniature autonomous inspector, tasked to conduct visual inspection of the host satellite.

The first pair of MEPSI satellites was launched by a custom deployer aboard the STS-113 Endeavour mission on the 2 December 2002. The spacecraft were manufactured for DARPA by The Aerospace Corporation in collaboration with the NASA Jet Propulsion Laboratory. The two spacecraft are cubic in shape, weight 1 kg each, and are connected via a 15.2 m tether in order to facilitate detection and tracking via ground-based radar. The spacecraft carried a cold gas propulsion system, with 0.1 N thrust with 5 thrusters. This propulsion system includes MEMS pressure transducers and was supplied by Vacco Industries under a US $152k contract.

The third and fourth pairs, to be launched in 2006 by Space Shuttle mission STS-121 and onboard of the STPSat 1 satellite were cancelled, as these launch opportunities did not provide enough time to implement the changes in the aftermath of the STS-116 mission. STPSat-1 nevertheless carried the deployer, albeit with inert dummy masses.