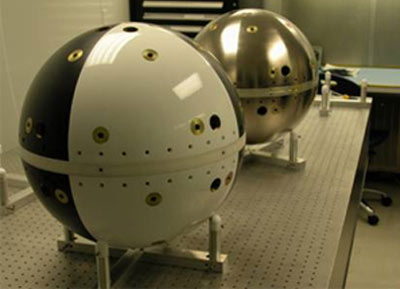 This experiment consists of two micro satellites, the Mock ANDE Active (MAA) spacecraft and the Fence Calibration (FCal) spacecraft, that are launched from the Space Shuttle cargo bay.

The main mission objective of the first mission (ANDE RRM) is to test the deployment mechanism from the shuttle for the ANDE flight in 2008 and to begin preliminary scientific measurements. Scientific objectives of the ANDE missions include monitoring total neutral density along the orbit for improved orbit determination of space objects, monitoring the spin rate and orientation of the spacecraft to better understand in-orbit dynamics, and to provide a test object for polarimetry studies. The mission will provide objects in low Earth orbit with well-determined ballistic coefficients and radar cross-sections for comprehensive atmospheric modeling. Each mission will include a passive and an active spherical spacecraft in a lead-trail orbit configuration. The passive sphere will be tracked with the Space Surveillance Network (SSN) and SLR to study atmospheric drag and in-track total density. The active sphere will have on-board instrumentation to measure atmospheric density and composition. The active sphere will monitor its position relative to the passive sphere to study drag models. The active satellites will communicate on-board data through a system of modulated retro-reflectors (MRR).

The ANDE risk reduction FCal (Fence Calibration) satellite is a 17.5-inch sphere with a mass of 75 kg. Its name is derived from its intended use as a calibration target for the radar fence, a space surveillance system recently transitioned from the Naval Network and Space Operations Command to the Air Force 20th Space Control Squadron. The size requirement of FCal satellite was determined by the resonant frequency of the Navy radar fence. The two hemispheres are fabricated by spin-casting brass, followed by machine finishing. The exterior of each hemisphere is nickel coated for durability in the harsh space environment. The equator consists of an anodized aluminum deck that incorporates an antennae deployment system, and mounting locations for the FCal payload. A cubesat ballast mass is included for center of gravity symmetry.

The FCal satellite will have the same geometry as the MAA satellite for its for the retro reflector array. It will also contain temperature sensors and sun sensor modules distributed similarly. The FCal satellite is different from the other ANDE satellites in size, mass, finish, and payload. The size and mass differences will cause the satellites to separate over time into lead-trail orbit as the atmospheric drag causes a greater retardation of the larger and less massive MAA sphere. Consequently, the greater mass of the FCal sphere will enable it to have a longer lifetime before reentry, two years as compared to one year. By having two co-planar satellites, scientists can gain a better understanding of the geographic and temporal variations of the local atmospheric density at these altitudes. Attaining the necessary mass of the FCal satellite was one of the main challenges of designing this particular satellite.

The FCal satellite contains a cubesat as a internal payload, a cube-shaped microsatellite that stores its experiments like shelves in a cabinet. The cubesat is a four-inch pico-satellite originally designed as an educational platform. It is a fully functional satellite with solar power (not used in FCal), battery power, a computer, and a communications subsystem. It can accommodate small payloads in the internally available space. The cubesat in Fcal was developed by Ivan Galysh, a member of the StenSat group working in the Space Applications Branch of NRL's Naval Center for Space Technology.

When the FCal is deployed, the processor boots and initializes all the satellite components. It then waits one minute and deploys the antennas one at a time. There is a one-second delay between the deployment of each antenna. Once deployed, the satellite starts monitoring all the sensors and internal parameters and transmits the telemetry once every two minutes. The satellite can accept commands during this period. The telemetry transmission interval can be set and the receiver audio can be routed to the transmitter to turn the satellite into a transponder. Telemetry data includes voltage and temperature from each of the six phototransistors, battery and power data, and internal temperature data. The purpose of the telemetry is to determine the spin rate and orientation of the FCal spacecraft.

The arrangement of the MAA and FCal satellites in a lead-trail orbit provides an exceptional set of targets to study drag modeling and its effect on satellite drag. This mission will demonstrate the effectiveness of flying low-cost calibration targets to support DoD and NASA requirements for precision orbit determination and collision avoidance. In addition, data from this mission will be used to improve the scientific understanding of the interaction between a spacecraft and its environment.