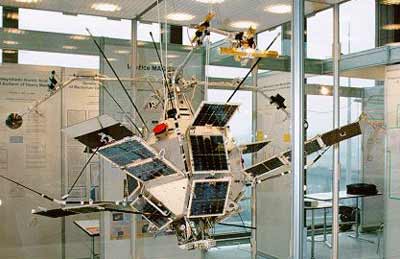 Magion 2 was manufactured as the subsatellite of the ACTIVE (Intercosmos 24) spacecraft and as the first subsatellite of a series of international scientific projects ACTIVE, APEX, INTERBALL. As opposed to Magion 1 this spacecraft series with weight up to 65 kg had the form of a simmetrical polyhedron, had a set of folding booms for sensors, has digital system of data collection and had a gasjet propulsion engine. The scientific goal of the subsatellite of the ACTIVE project was to investigate space structure of physical phenomena which accompany plasma injection and to investigate powerful ULF emission into the magnetosphere as in a near (up to 10 km) zone, as well as in middle and far zones of the main spacecraft on which active injecting devices were mounted.

The Magion 3 spacecraft was manufactured as the subsatellite of the APEX (Intercosmos 25) spacecraft. The APEX project had the following primary objectives: Simulation and initiation of aurora and radio frequency radiation in the auroral area; study of the dinamics of modulated beams and plasmoids in the near - earth plasma; study of the nature of electrodinamic relationship of electromagnetic waves in magnetosphere and ionosphere; determination of radio emission characteristics of modulated beams of charged particles and plasmoids; search for non-linear wave structures of the electromagnetic soliton type in disturbed environment. The Magion 3 scientific payload was almost the same as for Magion 2.

The Interball Project is a multi-national effort that consists of four spacecraft: two main spacecraft of the Prognoz series (Interbol 1, 2), made in Russia, each with a small subsatellite made in Czechoslovakia. The main objective is to study the physical mechanisms responsible for the transmission of solar wind energy to the magnetosphere, its storage there, and subsequent dissipation in the tail and auroral regions of the magnetosphere, ionosphere, and atmosphere during magnetospheric substorms. A ground-based support group will provide coordinated and simultaneous ground-based data of many types, including observations from auroral and polar cap regions. Interball is an IACG-related mission. Key physical parameters will be generated, and will be available for exchange with other projects. Campaigns for intercomparison with the Wind and Geotail spacecraft are expected. One pair of spacecraft, Tail Probe and its subsatellite Magion 4 or S2-X (X for the first letter of the Russian word for ``Tail''), was launched into the magnetospheric tail. The second pair, Auroral Probe and Magion 5 or S2-A (A for ``Auroral''), will have an orbit that crosses the auroral oval to observe the acceleration of auroral particles and the flow of electric currents that connect the magnetospheric tail with the conducting ionosphere. To study the equilibrium tail structure, during about half of each year the Tail Probe pair will cross the main parts of the magnetotail every four days. The Tail Probe, with approximately 30 earth radii apogee, will cross the noon-midnight plane on December 1, so the measurements in the magnetotail will cover the period from October 1995 to February 1996. The Auroral Probe pair will support the Tail Probe pair with auroral region measurements.

The subsatellites are small, each with about ten scientific instruments. The spin axis will be directed within 10 degrees of the sun, with a spin period of ~120 s, as with the main spacecraft. The subsatellites also carry gas-jet thrusters for limited control of the orbit. Separation distance will range from hundreds of kilometers to several tens of thousands of kilometers for the Tail Probe pair. Separation distance will range from hundreds of meters to hundreds of kilometers for the Auroral Probe pair. The Tail Probe has two telemetry systems, at up to 32 Kbps in real-time, with a memory mode capacity of 30 Mb in the RTK telemetry system and 120 Mb in the SSNI system. The Auroral Probe has similar capability plus the additional real-time-only STO system, capable of 40 Kbps. Each subsatellite has only the STO real-time telemetry system. For S2-X the rate can be varied from 2-40 kbps.