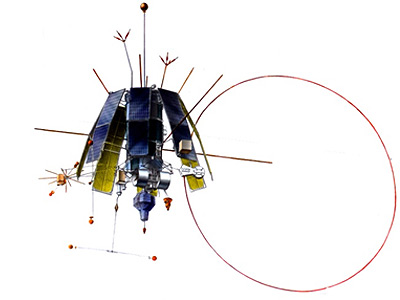 The Active mission, consisting of the Soviet Active spacecraft and the closely orbiting Czech subsatellite Magion 2, had the main objectives of better understanding of the radiation properties of loop antennas in a plasma environment, spatial structure of E-M fields in the near zone, non-linear effects in the near zone, propagation and non-linear effects of whistler modes, triggered particle precipitation and triggered waves, and detection of ground-based VLF transmissions. Active was triaxially stabilized, with a 14 meter boom providing stability of the vertical axis, and the other axes stabilized by gas jets. The stabilization ensured that the plane of the loop antenna, fed by a 10 kW, 10 kHz transmitter, remained in the orbital plane. Attitude profile was telemetered along with other data. An onboard tape recorder could carry 60 Mb of data. It carried two separate batteries, charged by solar panels: one for the high power VLF transmitter and the other for all other instruments. The VLF battery was charged for several hours, before each session of many minutes long transmission. The other active experiment was the many releases of Xenon gas to test the so called Critical Velocity Ionization. The relative distance between Active and Magion 2 could be maneuvered and determined with a precision of 100 meters by means of lidar tracking. The main objectives of the mission remained unrealized because of the mis-deployed VLF loop antenna; the radiated power was estimated to be no more than about 50 W. The operation schedules of the Active mission were coordinated with the many NASA (and other)-sponsored investigations of the magnetosphere.