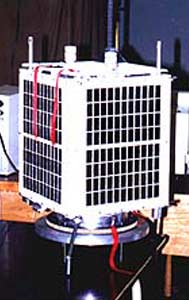 MuSat 1 is an experimental vehicle, intended to evaluate in-orbit behaviour of low-cost space technologies. It weights 32 kg in-orbit (34.5 kg mounted onto the LV), and has dimensions 340 × 340 × 450 mm. It carries two video cameras, oriented for earth-imaging, as well as transceivers in both UHF and S bands. Electrical power is provided by four 88-Si cells solar panels, with an end-of-life electrical power of 8W. Its position is determined by means of a 3-axis, flux-gate magnetometer, as well as both solar and horizon sensors, while its attitude is 3-axes controlled by magnetic coils and reaction wheels, with an expected pointing precision of 0.5 deg.

MuSat 1 (Mu (Micro) Satellite) - renamed Victor in orbit - was launched August 29th. 1996, together with Magion 5 and Interbol 2 by a Molniya-M (Blok-2BL-SM2) rocket. The satellite separated from launch vehicle at 05:31 UTC, into a 239 × 1149 km, 62.8 deg inclination orbit, becoming the first argentine built satellite. It is reported to be functional.

MuSat-1 was developed and built by a 25-person team, at the instituto universitario aeronautico, under the Sponsorship of the government of the province of Cordoba, in a 3.5 year, US$1.2M effort. The beacon can be heard every 90 seconds on 137.95 MHz as a brief burst of CW ("Hi hi de MUSAT"). It finally decayed on the 12th November 1999.