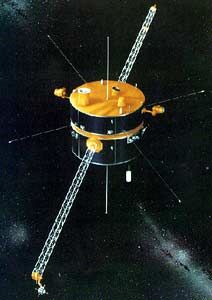 The main purpose of the Wind spacecraft is to measure the incoming solar wind, magnetic fields and particles, although early on it will also observe the Earth's foreshock region. Wind, together with Geotail, Polar, SOHO, and Cluster projects, constitute a cooperative scientific satellite project designated the International Solar Terrestrial Physics (ISTP) program which aims at gaining improved understanding of the physics of solar terrestrial relations.

Wind has on-board propulsion and its design lifetime is three to five years, with redundant subsystems. Wind is cylindrical, approximately 2.8 m in diameter by 1.25 m high, with body-mounted solar cells. It has long wire spin-plane antennas, inertial booms, and spin-plane appendages to support sensors. Wind has experiment booms deployed along both Z axes. The spin rate is 20 rpm around an axis within 1 degree of normal to the ecliptic.

Data are stored using on-board tape recorders and are relayed to the Deep Space Network at one of two rates: 5.5 or 11.1 kbps.

For the first nine months of operation, Wind was placed in a double-lunar swingby orbit near the ecliptic plane, with apogee from 80 to 250 Earth radii and perigee of between 5 and 10 Earth radii. In this orbit, lunar gravity assists were used to keep its apogee over the day hemisphere of the Earth, and magnetospheric observations are made. Wind was then inserted into a small "halo" orbit, about the sunward Sun-Earth gravitational equilibrium point (L1), varying from 235 to 265 Earth radii. In this orbit Wind measures the incoming solar wind, magnetic fields and particles continuously and provides an approximately one-hour warning to the other ISTP spacecraft of changes in the solar wind.