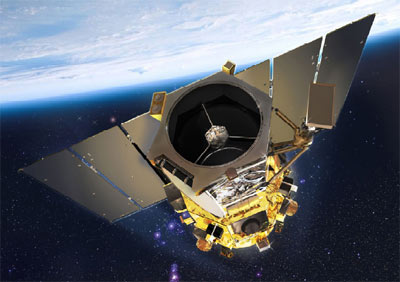 GeoEye's next-generation GeoEye 1 (formerly OrbView 5) satellite system will orbit 660 km above the Earth in a sun-synchronous orbit while collecting imagery at 0.41 meter resolution in the panchromatic (black and white) mode, and 1.64 meter resolution in the multispectral (color) mode. When OrbView-5 joins the company's OrbView 3 satellite in mid 2008, the constellation will collect more than 1.2 million square kilometer of imagery per day with a combined revisit period of less than 1.5 days for any geographic target.

Principal partners for the development and launch of the OrbView-5 satellite include General Dynamics (formerly Spectrum Astro), Kodak/ITT Industries and Boeing Launch Services. Partners for the ground segment include IBM and MacDonald, Dettwiler and Associates of Canada.

NGA announced on 30 September 2004 that it has selected ORBIMAGE as its NextView second vendor after a competitive selection process conducted over the last six months. The contract, awarded 30 September 2004, runs through 30 September 2008 and will provide ORBIMAGE with both long-term revenue commitments as well as capital for the development of OrbView-5, ORBIMAGE's next-generation high-resolution imaging satellite. The contract, known as NextView ORBIMAGE, also assures NGA of greater access and priority to high-resolution commercial satellite imagery.

After the fusion of OrbImage and Space Imaging as the new company GeoEye, the satellite was renamed GeoEye 1.