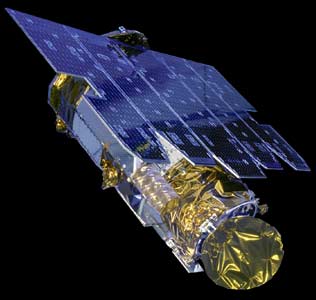 The LEOStar bus serves as the platform for the high resolution imaging instrument. The bus design originated with the Space Test Experiment (STEP) program in 1991 and consists of 12-sided horizontal honeycomb equipment decks and aluminum plate or honeycomb side panels that stiffen the structure and provide additional radiation protection for the equipment mounted inside. The bus structure is divided into three modules (propulsion, core and payload), each of which is constructed so components can easily be attached to each other for final assembly and checkout.

The OHRIS (OrbView High Resolution Imaging System) wass designed and built by Northrop Grumman, Baltimore, MD. The objective was to provide global high-resolution imagery (1 m panchromatic and 4 m multispectral) on a commercial basis. OHRIS is identical to the instrument flown on OrbView-4. OHRIS is an optomechanical instrument (whiskbroom imager) based on a three-mirror anastigmatic (TMA) telescope design with an aperture diameter of 45 cm. The nominal scene size of the imagery is 8 km × 8 km (the swath width is 8 km) with a spatial resolution of 1 m (Pan) and 4 m (MS) at nadir. The source data was generated with 11-bit quantization and compressed to 2 bits/pixel. The instrument mass was 66 kg.

OrbView-3's imaging sensor failed on 4 March 2007. The satellite remained in control until it was deliberately deorbited in early 2011.