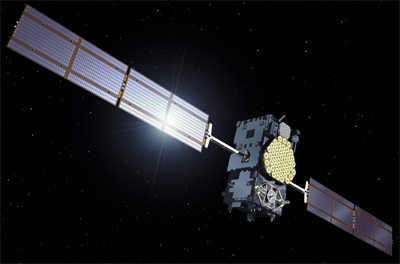 The Galileo satellite navigation system will consist of a total of 30 spacecraft in three planes in medium Earth orbit, which will each be occupied by nine satellites, and with three spares satellites distributed on the three orbital planes. At an altitude of 23,616 kilometers and an inclination of 56 degrees, the system will provide accurate positioning data to users as far north as 75 degrees latitude.

Although similar in design to the American GPS system and the Russian GLONASS navigation network, Galileo will be under the control of strictly civilian organizations. Galileo is the first joint program to be shared between the European Space Agency and the European Union.

Galileo FM4 suffered a temporary power loss in may 2014 and finally a permanent power failure in July 2014.