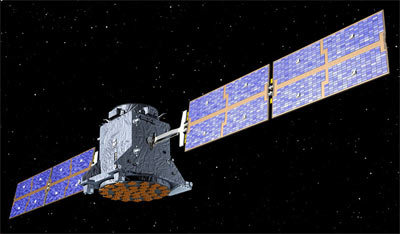 In a contract to SSTL worth £20 million (€28 million), the demonstrator satellite called the GSTB-v2A (Galileo System Test Bed v2A) will provide the first Galileo navigation signal from space, measure the radiation environment in the proposed Galileo orbit and assist with international radio regulation issues. Using GSTB-v2A, to be launched into a 23,616 km circular 56° inclination medium Earth orbit, ESA will be able to obtain an early experimental signal for the demonstration of Galileo technology and have an opportunity to test key European technologies in the harsh space environment that the operational Galileo satellites will encounter. The results from the GSTB-v2A mission will be taken into account in the follow-on projects that will develop the full Galileo constellation of 30 satellites. Having an in-orbit test bed satellite will greatly reduce the technical risks in the development of the full constellation. GSTB-V2/A will secure the Galileo frequency filings, validate new technologies for operational use, characterise the radiation environment of the medium earth orbits that the operational satellites will occupy and enable experimentation with live Galileo signals.

SSTL specialise in delivering space missions with demanding technical, financial and schedule constraints and the company is especially well suited to perform missions such as GSTB-v2A. In preparing the GSTB-v2A satellite for ESA, SSTL will draw heavily on the results of the UK British National Space Centre's ‘MOSAIC' initiative, which partly funded the company's development of a low-cost geostationary communications satellite.

The satellite has been renamed GIOVE A (Galileo In-Orbit Validation Element A) in November 2005.

A second satellite, GIOVE A2, was ordered in March 2007 for a launch in 2008 to further secure the frequencies in case of a failure of GIOVE A or of further delays in GIOVE B. GIOVE A2 will carry some enhancements over GIOVE-A that will allow additional signals to be generated and received on the ground. The aim will be to provide early in-orbit experimentation on the common baseline L1 open service signals. With the success of GIOVE B, the need for the A2 satellite has vanished and the work has been cancelled.