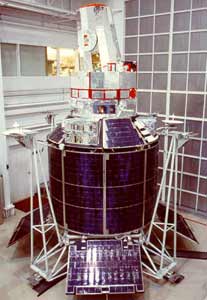 The Soviet threat grew in its diversity and unpredictability between 1975 and 1985. These growing and improving threats included longer range SLBMs with increased submarine deployment time and numbers, multiple reentry vehicle (MRV) and multiple independent reentry vehicle (MIRV) missiles, mobile ICBMs, and anti-satellite systems (ASATs) such as orbital interceptors, developing ground-based lasers, and particle beam weapons. The DSP system responded by introducing the Multi-Orbit Satellite/Performance Improvement Modification (MOS/PIM) satellites, designed with multi-orbit capability. They could be orbited into normal geosynchronous orbits (22,300 miles above the earth surface), and also highly elliptical orbits (HEO). The weight of these satellites was increased to 1170 kg with the addition of extra external electronic packages for hardening and survivability, and attitude control system fuel which allowed extending the orbital design life of the satellite to three years. Electrical capacity was increased to 500 Watts. The MOS/PIM satellites can be distinguished from the DSP Phase II satellites by three (instead of two) electronic packages (located 90 degrees apart) on the rim of the satellite's conical section.

Satellites in this series were Flights 8 through 11, launched between 1979 and 1984. Launch vehicles for this series included the Titan-3(23)C and the first DSP use of the Titan-34D Transtage, both with Transtages for insertion into GEO orbit.