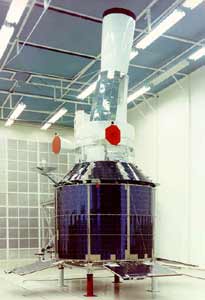 The primary mission of the DSP satellite is to detect and report any Intercontinental Ballistic Missile (ICBM) or Sea Launched Ballistic Missile (SLBM) raids against the U.S. and its allies. Its secondary missions include space launch detection and nuclear detonation detection in support of international test ban treaties. Development of the Soviet Union's first ICBM in the 1950's created a threat for which the U.S. had no in-place defense. The combination of man-made orbiting satellites and the capability of infrared (IR) sensors to detect the intense heat radiation of rocket engines drove the initiative for a space-based early warning system (SBEWS). Beginnings of a DSP-like system had its initial operational test and evaluation in the early 1960s.

The first four launches of the DSP satellites, Flights 1 through 4 and collectively known as "Phase I", began in 1970 and established the initial operational constellation. A Titan-3(23)C rocket along with a Transtage, the country's largest military launch workhorse at that time, placed the flight into parking and then geosynchronous orbit (GEO), its operational orbit. These launches covered the period from 1970 through 1973. Each satellite weighed approximately 907 kg, and had a power output of 400 Watts through a combination of solar cells around the body of the satellite and on four deployable paddles. Initial design life for each satellite was a short 1.25 years. The DSP Phase I satellite was designed to provide early warning against both Soviet and Chinese ICBMs and Soviet short range SLBMs around the Continental United States (CONUS). This warning was provided by an IR sensor array of 2000 Lead Sulfide (PbS) detectors which gave below-the-horizon (BTH) coverage.