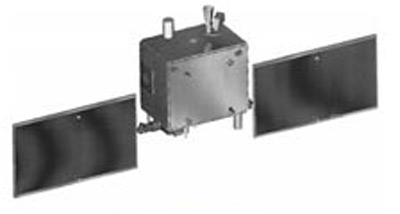 MITEx (Micro-Satellite Technology Experiment) is an experimental U.S. military project to test whether the advanced technologies embedded in two miniature satellites and a new upper stage kick motor can operate through the rigors of spaceflight-

Once arriving in geostationary orbit, the satellite pair will be deployed from the stage to begin independent lives examining the value of operating miniature craft from such a high vantage point above Earth. The demonstration will give military planners real-life experience to draw upon when designing new projects.

The MiTEx spacecraft weigh about 500 pounds each. Orbital Sciences built one satellite and Lockheed Martin the other.

The satellites will conduct a variety of experiments in autonomous operations and maneuvering and station-keeping. Among their applications is probably the inspection of satellites in the geostationary orbit. One of the MITEx satellites maneuvered close to the defunct DSP 23 early warning satellite, probably to assess the malfunction. The first made a flyby on December 23 2008 and the second on New Year's Day 2009.

The price tag for MiTEx has not been released. And the exact parking spots in geostationary orbit for the two spacecraft aren't being revealed.