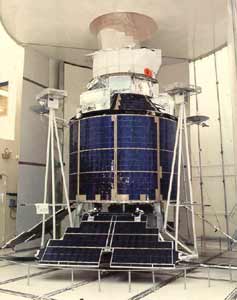 During TRW's production of DSP Phase II spacecraft (5-9), Spacecraft 5 and 6 were put into storage after completion since other Phase II satellites were lasting longer on orbit than expected, and the DSP MOS/PIM block was coming on line. The two DSP Phase II spacecraft were later retrofitted and redesignated as 5R and 6R. These retrofit satellites were redesigned for continued improved performance that started with the DSP MOS/PIM block change, an improved RADEC sensor, and a new primary IR sensor. The increased performance for Satellites 5R and 6R included improved resolution and a push for better polar/global coverage. The new primary IR sensor was known as Sensor Evolutionary Development or SED. This IR sensor now had a total of 6000 detectors on the sensor focal plane, an increase of 4000 detectors, and provided an Above the Horizon (ATH) capability for increased resolution and polar coverage. A second type of detector, Mercury Cadmium Telluride or HgCdTe, was tested for the first time on this block to demonstrate a second waveband capability, which was also known as second color or Medium Wave Infrared (MWIR). With a greater number of detectors and associated electronics for signal processing, the weight of the satellite increased to 1674 kg, with solar panels now providing 680 Watts. Design life was still kept at three years like the DSP MOS/PIM block. The Phase II Upgrade satellites could be distinguished from DSP MOS/PIM satellites by the different size and shape of the sensor, and the unique set of triangular solar panel paddles.

Satellites in this series were Flight 12 (Satellite 6R) and Flight 13 (Satellite 5R), launched between 1984 and 1987. The launch vehicle was the dependable Titan-34D Transtage with a Transtage.