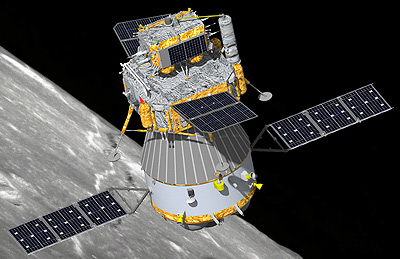 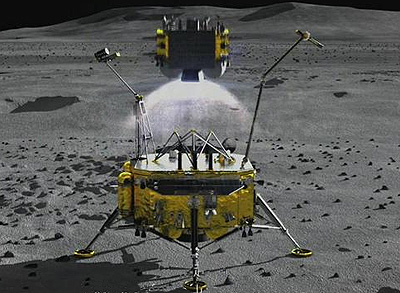 The mission was to be launched in late 2017 on a CZ-5 rocket from Wengchang, but it was delayed to 2019 due to the launch failure of the second CZ-5 rocket and then to November 2020.

Chang'e 5 entered 400 km lunar orbit on 28 November 2020. On the morning of 30 November 2020, the lander with the ascender separated from the lunar orbiter in preparation for landing. The lander and ascender landed on the Moon on 1 December 2020 at 15:11 UTC. The mission's landing zone is near Mons Rümker in Oceanus Procellarum, located in the northwest region of the Moon's near side. This area contains geological units around 1.21 billion years old, compared to the Apollo samples that were between 3.1 and 4.4 billion years old. The location is a large, elevated volcanic mound 70 km in diameter that features a strong spectroscopic signature of basaltic lunar mare material. On 3 December 2020, the ascender lifted off from Oceanus Procellarum at 15:10 UTC and, six minutes later, achieved lunar orbit. The ascender docked with the orbiter-returner combination in lunar orbit on 5 December 2020 at 21:42 UTC, and the samples were transferred to the return capsule at 22:12 UTC. Undocking of the ascender from the orbiter-returner combination took place on 6 December 2020 at 04:35 UTC. After completing its role in the mission, the ascender was commanded to deorbit on 7 December 2020 at 22:59 UTC, and crashed into the Moon's surface at 23:30 UTC, in the area of (~30°S, 0°E). On 13 December 2020 at 01:51 UTC, from a distance of 230 kilometers from the lunar surface, the orbiter and returner successfully fired four engines to enter the moon-Earth Hohmann Transfer orbit. On 15 December 2020, the return capsule landed back on earth.

A second sample return mission, Chang'e 6 is being built as a back-up. If Chang'e 5 is successful, Chang'e 6 will be repurposed for a landing at the lunar south pole around 2023.