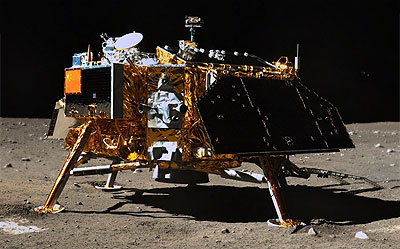 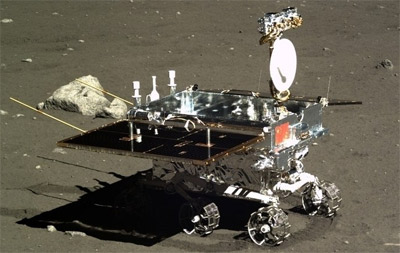 Chang'e 3 is China's first lunar lander project, which consists of a lander module, which will deploy the solar powered Yutu rover on the lunar surface.

The lander is powered by solar arrays, augmented by a RTG (Radioisotope Thermoelectric Generator) to provide power during the lunar nights. The lander has a mass of 1200 kg and has a scientific payload of seven instruments and cameras. One of the paylaods is an astronomical telescope, comprising an EUV (extreme ultraviolet) camera, to investigate, how solar activity affects the ion layer near the Earth. This makes Chang'e 3 the world's first lunar-based astronomical observatory.

The 120 kg rover, named Yutu, is deployed after landing from the lander to explore areas surrounding the landing spot. It is powered by solar arrays, which allow operation during the lunar day. During the night, it remains inactive and is heated by a RHU (Radioactive Heater Unit). It carries a 20 kg payload consisting of panoramic cameras for live viedeo and two spectrometers, one operating in the infrared, the other using alpha particles and X-rays. Also it carries a ground penetrating radar to inspect the composition of the soil and the structure of the crust beneath it.

A CZ-3B/G2 vehicle launched the Chang'e 3 mission in 2013 from Xichang. It landed on 15 December 2013 at the Sinus Iridum basaltic lava plain, that forms a northwestern extension to the Mare Imbrium. The Yutu rover was deployed, but suffered a mechanical control abnormality and failed to move after hibernating for its first 14-day night spent on the Moon. Yutu managed to operate from a stationary position for over two years, contributing to the science goals of the mission.

A similar second rover mission called Chang'e 4 is planned to land on the lunar far side in 2018, deploy the Yutu 2 and is to communicate via the Queqiao (Chang'e 4 Relay) satellite.