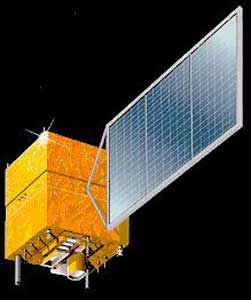 The CBERS (China Brazil Earth Resources Satellite) or ZY 1 (Zi Yuan) satellites are designed for global coverage and include cameras to make optical observations and a data collecting system to gather data on the environment. They are unique systems due to the use of on-board sensors which combine features that are especially designed to resolve the broad range of space and time scales involved in the monitoring and preservation of the ecosystem. They are operated jointly by the China Centre for Resources Satellite Data and Application (CRESDA) and the Brazilian INPE (Instituto Nacional de Pesquisas Espaciais, National Institute of Space Research).

The CBERS satellites enhance and complement the existing remote sensing systems in an effort to improve our knowledge about the Earth environment and resources.

A unique characteristic of CBERS is its multi-sensor payload with different spatial resolutions and data collecting frequencies.

The CBERS satellite is composed of two modules. The payload module houses the optical and electronic systems used for Earth observation and for data collecting. The service module incorporates the equipment that ensures the power supply, the control, the telecommunications and all other functions needed for the satellite operation.

The 1100 W of electrical power needed to operate the on-board equipment are obtained through solar panels that are deployed when the satellite is in orbit and that are continuously oriented towards the sun by automatic control. To provide the stringent pointing accuracy needed by the sensor systems that will take high resolution images from a distance of about 800 km, the satellite is equipped with a sensitive attitude control system that is complemented by a set of hydrazine thrusters which are also used in eventual satellite orbit correction maneuvers. The internal data used to monitor the satellite health are collected and processed by a distributed computer system before being transmitted to the Earth. An active and passive thermal control system provides the appropriate environment for operation of the sophisticated on-board equipment.

CBERS has a sun-synchronous orbit at an altitude of 778 km, completing about 14 revolutions per day. The local solar time at the crossing of the equator is always at 10:30 A.M., thus providing the same solar ilumination conditions for comparing images taken in different days.

It takes 26 days for the satellite to revisit the same Earth location. This is the time necessary to image the entire Earth with the CCD and the IRMSS cameras that have narrow fields of view. On the other hand, using the WFI camera which is able to take images that are 900 km wide, the time required for a global coverage is 5 days.

The sideways pointing capability of the high resolution CCD camera combined with the type of satellite orbit provides steroscopic vision capability for a given region with an interval of 3 days between the two elementary images.