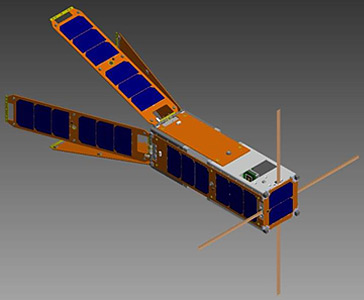 The Air Force Institute of Technology's (AFIT) ALICE (AFIT LEO iMESA CNT Experiment) is a nanosatellite in NRO's Colony-1 program to test technologies in orbit. NRO purchased 12 3-unit CubeSat busses with deployable solar panels and three-axis control from Pumpkin Inc. The NRO distributed the structures to other Defense Department or federal agency partners and universities to develop and integrate a variety of payloads.

Georgia Tech manufactured the carbon nanotube array and AFIT built the payload and assembled and tested the satellite. Performance evaluations of the carbon nanotube array were done using custom built integrated miniaturized electrostatic analyzer (iMESA) sensors, based on designs provided by the U.S. Air Force Academy. The ALICE satellite is a 3U cubesat supplied by the National Reconnaissance Office Colony CubeSat program.

ALICE was designed, tested, and integrated at AFIT at Wright-Patterson Air Force Base by a multi-department team of professors, students, and technicians. The team is comprised of military officers and civilians, and includes students from local southwest Ohio universities.

The ALICE mission was controlled by a ground station at AFIT. It represents an end-to-end space mission design, build and fly capability and is the first of many such flights planned by AFITs newly formed Center for Space Research and Assurance.

ALICE ventured into space on an Atlas-5(501) rocket with the GEMSat/ELaNa II NASA mission. It rode along with several other secondary payloads inside the GEMSat container.