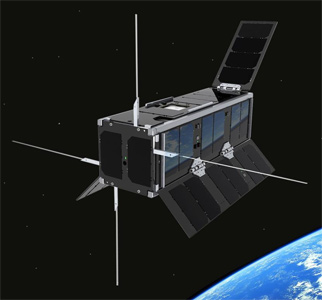 UKube 1 is a 3U CubeSat nanosat to test new technologies in space.

The UK Space Agencys pilot programme to design and launch a CubeSat - a miniature cube-shaped satellite that will allow the UK to test cutting-edge new technologies in space - is now well underway. In December 2010 the payload competition for the pilot mission, UKube-1, stimulated more than 20 high quality proposals from UK industry and academia, and from these the Space Agency selected 7 excellent proposals for further development. In March 2011 four payloads were finally selected to fly on UKube-1. These will be integrated onto the spacecraft, which measures just 10 cm × 10 cm × 34 cm, by Clyde Space. In addition UKube-1 will fly FunCube-2, an educational payload provided by AMSAT-UK, with the goal of enthusing and education young people about space, electronics, physics and radio. The FUNcube-2 payload is similar to the dedicated FUNcube 1 satellite.

The winning payloads from the UK Space Agency's payload competition include the first GPS device aimed at measuring plasmaspheric space weather; a camera that will take images of the Earth and test the effect of radiation on space hardware, using a new generation of imaging sensor; an experiment to demonstrate the feasibility of using cosmic radiation to improve the security of communications satellites and to flight test lower cost electronic systems; and a payload made up of 5 experiments that UK students and the public can interact with.

UKube-1 is the pathfinder mission for a national cubesat programme of one mission a year.

It is envisaged that the national CubeSat programme will not only increase the UKs ability to market new space technologies; it will also provide hands-on, real-time training and research opportunities for the next generation of space engineers and scientists, at relatively low-cost and within a short timescale.

UKube-1 is collaboration between the UK Space Agency, industry and academia. The funding partners for UKube-1 are the UK Space Agency, the Technology Strategy Board and STFC. The spacecraft is being developed through a Knowledge Transfer Partnership with innovative Scottish company Clyde Space and the University of Strathclyde, supported with internal funding from Clyde Space. The UKs largest space company, EADS Astrium Ltd, is providing engineering and programme management support to the Agency for the pilot programme. UK industry and academia are providing the payloads and the ground support operations.