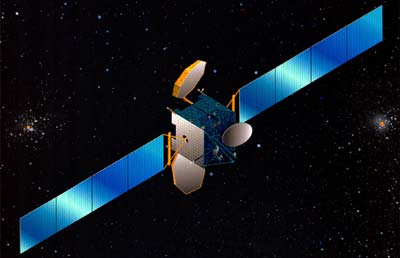 SUPERBIRD-C was successfully launched on 27 July 1997, aboard an Atlas-2AS launch vehicle from Cape Canaveral, Fla. It joined the existing constellation of SUPERBIRD-A at 158° East and SUPERBIRD-B at 162° East.

The satellite was built at the Integration and Test Complex in El Segundo, Calif. Hughes was responsible for the overall design, manufacturing, and integration of the satellite, which carries 24 active transponders powered by 90 watt, linearized traveling wave tube amplifiers. The satellite also has a pair of four-panel solar arrays that generate 4500 Watts of electrical power. During eclipse, electrical power is supplied by a 29-cell nickel-hydrogen battery, with the capacity of 200 Amp-hour.

The three-axis body-stabilized satellite has both fixed and movable antennas and is designed to provide a 13-year mission life.

The spacecraft's communication payload is a state-of-the-art, cost-effective, and high-power system that simultaneously achieves high effective isotropic radiated power (EIRP) while making available a large number of channels over a vast geographic area. The flexible payload includes the ability for channel bandwidth to be selected from the ground. Two 54 MHz transponders at 90 Watts each can be combined to provide a single 114 MHz transponder at 180 Watts.

SUPERBIRD-C's Ku-band steerable spot-beam antennas were built by Mitsubishi Electric Corp. of Tokyo. The maneuverable spot beam antenna is capable of providing coverage to any location visible from the spacecraft's geosynchronous orbit location of 144° East longitude.

SUPERBIRD-C's final orbit insertion, as well as stationkeeping operations, are provided by the satellite's integrated bipropellant propulsion system. The required impulse will be generated by twelve 22 N (5 lbf) thrusters and one 490 N (110 lbf) liquid apogee motor.

Boeing Satellite Systems is the world's leading manufacturer of commercial communications satellites, and is also a major supplier of spacecraft for communications and space to the U.S. government and a builder of weather satellites for the United States and Japan.

The satellite was retired in 2015 and was moved into a graveyard orbit above the geostationary belt.