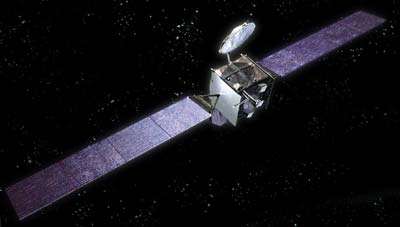 Space Communications Corporation (SCC), a Japanese satellite communications service company, ordered SUPERBIRD-6 (renamed Superbird A2 on orbit), another Boeing BSS-601 communications satellite, from Boeing Satellite Systems in September 2001. It is the third Boeing satellite to be built for SCC. SUPERBIRD-6 is scheduled to launch in the third Fall of 2003 on an Atlas-2AS launch vehicle from Cape Canaveral AS, Florida.

Superbird 6 was delivered by the Atlas-2AS launch vehicle to its predefined supersyncronous transfer orbit. But this orbit did not consider the moons gravity influence, which caused the perigee to drop. To rescue the satellite, most of its fuel was used up. Additionally the solar panels outer parts have reduced power, possibly due to the low perigee pass. The satellite can probably not enter service as planned in July 2004. One of two main fuel tanks on the spacecraft lost pressure on November 28. That anomaly will cause the spacecraft's lifetime to be significantly shortened. Apparently the satellite was never commissioned into regular service.