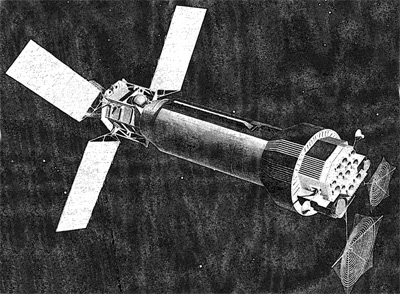 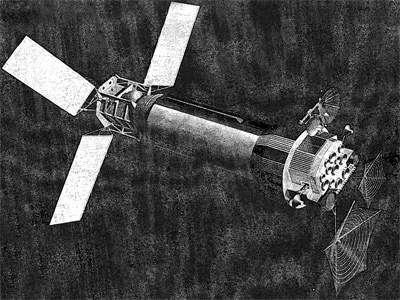 The Strawman series of ELINT/SIGINT satellites, known for decades only as "Heavy Ferrets", are the fourth variation of Agena-based ELINT satellites. These satellites were designed to detect, map and investigate SAM and ABM radars.

Using improved versions of the Multigroup and Setter payloads sharing a new solid·state core memory for the digital data and an improved tape recorder, called a data storage unit, for the wideband analog data, the proposed Strawman payload ofTered increased flexibility combined with improved payload performance, Moreover, room would be available for one additional payload that could share the recorders and other new support systems.

The Strawman satellites carried a number of payloads:

All ELINT payloads that were a part of the Strawman collection system - Thresher, Reaper, Convoy and Harvester - were connected to the predetection analog recorder in the prime payload.

The satellites of this series used a larger hammerhead payload fairing than the preceding Multigroup version of the Heavy Ferret series.

The Strawman 1 or Mission 7164 launch, another in the Project 770 series, was Agena vehicle 2734 on 5 October 1968. All of the payloads and support systems operated as designed. The satellite worked for a little over a year, twice the planned lifetime of six months. It featured the Thresher 1, Reaper 1 and Convoy 1 payloads.

Strawman 2 or Mission 7165, Agena 2735, launched on 31 July 1969, and operated for over 13 months, resulting in a projection of at least a nine month lifetime for the following launches. It featured the Thresher 2, Reaper 2, and Convoy 2 payloads.

Strawman 4 or Mission 7167, the final flown vehicle, Agena 2737, was launched on 16 July 1971 and lasted over 20 months. It featured the Thresher 5, Reaper 4 and Harvester payloads and likely one more still classified payload. On this mission the antenna connector to the lower band antenna of Harvester failed, thereby eliminating any chance to intercept the SA-5 signals at 5 GHz. This was the only major failure of any of the four vehicles. Strawman 4 also carried the RM 19 radiometer payload.

Strawman 5 or Mission 7168 was cancelled in 1971. It would have carried the Thresher 5 and Reaper 5 payloads. It is not clear, how far the hardware for this satellite progressed before cancellation.