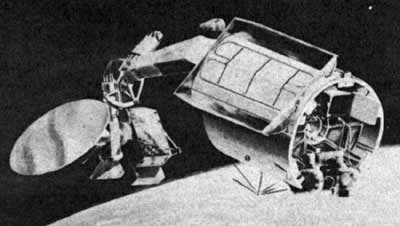 RM 20 (Radiometer 20) was a low-altitude satellite in circular orbit carrying four experiments. Two of the experiments were to study radiation from the earth horizon. A third experiment was to observe solar extinction through the stratosphere, and the fourth was to study ionospheric radio propagation. The spacecraft experiment support equipment included a three-axis stabilization system and a tape recorder.

The main instruments were the highly complex RM-20A/B satellite sensors, which were intended to collect infrared target and background data while approximating several features of potential operational concepts. The RM-20A was a scanning instrument operating within two spectral regions with sophisticated onboard data processing such as automatic thresholding and field-of-view sectoring. The instrument was gimbaled and incorporated a passive thermal control system, and produced data at 1.024 Mbps. The RM-20B was a mosaic sensor operating in one selected spectral region. It was gimbaled to compensate for orbital and earth rotation and provided data at 512 Kbps.