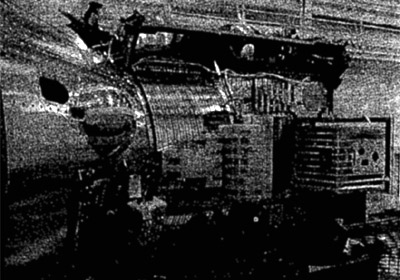 MRPV (Multi Research Payload Vehicle) was a satellite, which carried 21 experiments for the USAF.

The satellite consisted of instruments mounted on the front end and the aft payload rack of the Agena-D upper stage. They were not to be separated from the Agena-D

The purpose of the Night Air Glow experiment was to observe the worldwide distribution of night airglow at 3914, 5577, 5735, and 6300 Å and search for any correlation with precipitating energetic particles as detected by the Faraday Cup. A Fastie-Ebert monochromator would have scanned the ultraviolet spectrum between 1600 and 3200 Å and made a detailed study of atmospheric day radiance in that spectral range. The x-ray detector would have studied solar x-ray enhancements during solar outbursts.

The Satellite High Frequency Ionospheric Project (SHIP) experiment required deploying a small, box-shaped subsatellite from the main spacecraft and transmitting signals that would be collected both by ground stations and by receivers on the Agena. The subsatellite, mounted to the aft rack of the Agena, would be ejected so that after several minutes it would be below and moving slowly ahead of the main spacecraft. The plan was to make radio propagation measurements along the signal path between satellites, and to make measurements along the paths between the ground stations and each satellite.

MRPV was lost in an launch failure, when the rocket veered off course after 60 seconds. The debris struck an inhabited trailer home, but fortunately without any casualties.

The RM-12 and RM-15 radiometers have been reflown later on the KH-4A 43 reconnaissance satellite. The fuel cell was recoveredfrom the satellites's debris. The experiment plan called for it to operate for 50 hours in zero-g. The unit was shipped back to the Allis Chalmers company after being stored for three months following the accident. The company replaced some missing or damaged external components and then ran the unit, accumulating more than 200 hours.