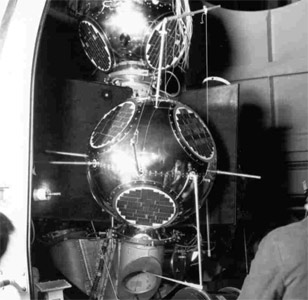 Geodetic SECOR (Sequential Collation of Range) was an all-weather geodetic survey system which was in operational use for several years, establishing a global survey network. It used the successive positions of artificial satellites in space to determine locations on the earth's surface with exactness over long distances. The system consisted of a satellite and four ground stations. three at geographical points where the co-ordinates had been surveyed accurately and the fourth at an unknown location. Radio waves were flashed from the ground stations to the satellite and returned. The position of the satellite at any time was fixed by the measured ranges from the three known stations. Using these precisely established satellite positions as a base, ranges from the satellite to the unknown station were used to compute the position of the unknown station. Geodetic SECOR allows continents and islands to be brought within the same geodetic global grid. Each ground station was entirely portable and contained three units: a radio frequency shelter, a data handling shelter and a storage shelter. Lighter weight, solid-state equipment was developed to replace the initial units.

There were two types of SECOR satellites: the spherical Type I SECOR and the cubic Type II SECOR version.

The earliest SECOR satellites were of the Type I variety. This version was of Solrad / Grab type spherical construction, 50.8 cm in diameter. The satellite was compatible with several launch vehicles, including the Scout missile, as the primary payload. The Type I was designed to be as simple as possible and to take maximum advantage of proven satellite techniques and existing hardware. This reflecting "ball" was designed for a 1 year lifetime and was capable of being photographed by Baker-Nunn cameras and the Smithsonian Astronomical Observatory. Its surface was of polished aluminum with a thin layer of silicon monoxide. The coating was used to help regulate internal temperatures. Six circular solar-cell plaques, about 20 cm in diameter, were spaced equidistant about the satellite's surface. Nine spring-loaded dipole antennas were also in evidence. About the equator were four antennas cut for 449 MHz and four cut for 224.5 MHz, alternately spaced, and connected as a turnstyle for circular polarization. A single 136 MHz telemetry antenna was attached at the apex of the satellite, 90° equidistant from the other antennas. A conical-shaped baseplate, placed on the satellite's base, was used for attaching the satellite to the ejection mechanism.

Inside the Type I was a cylindrical opening extending from the-baseplate to the base of the telemetry antenna. This opening was used to house the voltage regulator and battery pack. Magnetic despin rods were located throughout the inside area of the satellite's skin. The transponder (Cubic-built TR-17s or TR-27s) and telemetry system were connected to a framework within the internal satellite structure. The satellite's weight averaged 37 pounds, much of which was allocated to a power system designed to receive continuously and transmit 45 to 60 minutes within each 24 hour period.