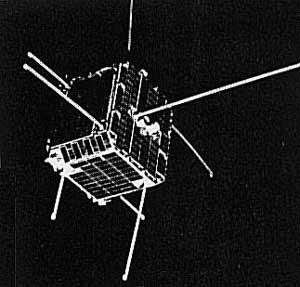 TOPO 1, the U.S. Army Topographic Command's first satellite, was launched from the Western Test Range (WTR) on 8 April 1970, piggyback with the Nimbus 4 meteorological satellite. Approximately 1 hr and 41 min after launch, the satellite was ejected from the final stage of the launch vehicle into a near-circular, near-polar orbit.

TOPO I was used primarily for research and development in determining the ultimate accuracy of SECOR when using transponders with ultra-stable oscillators. The objectives of the spacecraft were:

It was equipped with modified SECOR components including:

Power was supplied by solar cells mounted on the satellite's exterior recharing onboard batteries. The telemetry transmissions were made by flexible metal tape antennas that were wound around the satellite's structure and deployed after orbital injection. The satellite obtained excellent data for a 6-month period (May 1970 to October 1970). Owing to a lack of funding, however, further tracking was discontinued and, as of 14 January 1972, the satellite was orbiting in an operational off mode.