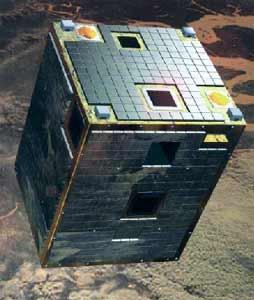 PROBA (Project for On-Board Autonomy), the size of a small box and in orbit 600 km above the Earth's surface, has provided scientists with its first detailed environmental images thanks to CHRIS - a Compact High Resolution Imaging Spectrometer - the main payload on the 100 kg European spacecraft.

Proba boasts an ‘intelligent' payload, has the ability to observe the same spot on Earth from a number of different angles and can record images of an 18.6 km square area to a resolution of 18 m. Data from the lightweight instrument are sent automatically from Proba to ESA's ground station in Redu, Belgium, where scientists will use it to monitor the ‘health' of our planet.

Proba is an ESA demonstrator satellite, set to lead the way for future small missions. Along with CHRIS, the spacecraft carries two other important scientific instruments, a radiation measurement sensor, SREM (Standard Radiation Environment Monitor) and a debris measurement sensor, DEBIE (Debris In-Orbit Evaluator), as well as a set of advanced spacecraft technologies. Another important instrument is the High Resolution Camera (HRC), which will soon provide its first black and white images at a resolution of 8 m.

The CHRIS instrument was designed and developed by Sira Electro-Optics of the UK, a European specialist in the field of high resolution imaging spectrometry.

Proba was one of three satellites on-board a PSLV rocket, successfully launched by the Indian Space Research Organisation (ISRO) and sent into orbit on 22 October 2001.